San Francisco Bay sailing weather is slightly different each day. Even though wind conditions may be similar from one day to the next, when coupled with the current  and time of marine layer clearing,  a different experience is produced.

Typical summer days have  brisk afternoon breezes with a marine layer in the morning that clears between and 10:00 Am and noon. When it really blows around 4:00 pm we try to have it so we are going with that wind rather than into it.  At that same time, the east side of Angel island is protected and can be very pleasant.

In the winter, winds tend to be lighter, so between storms can some of the most pleasant days of the year. 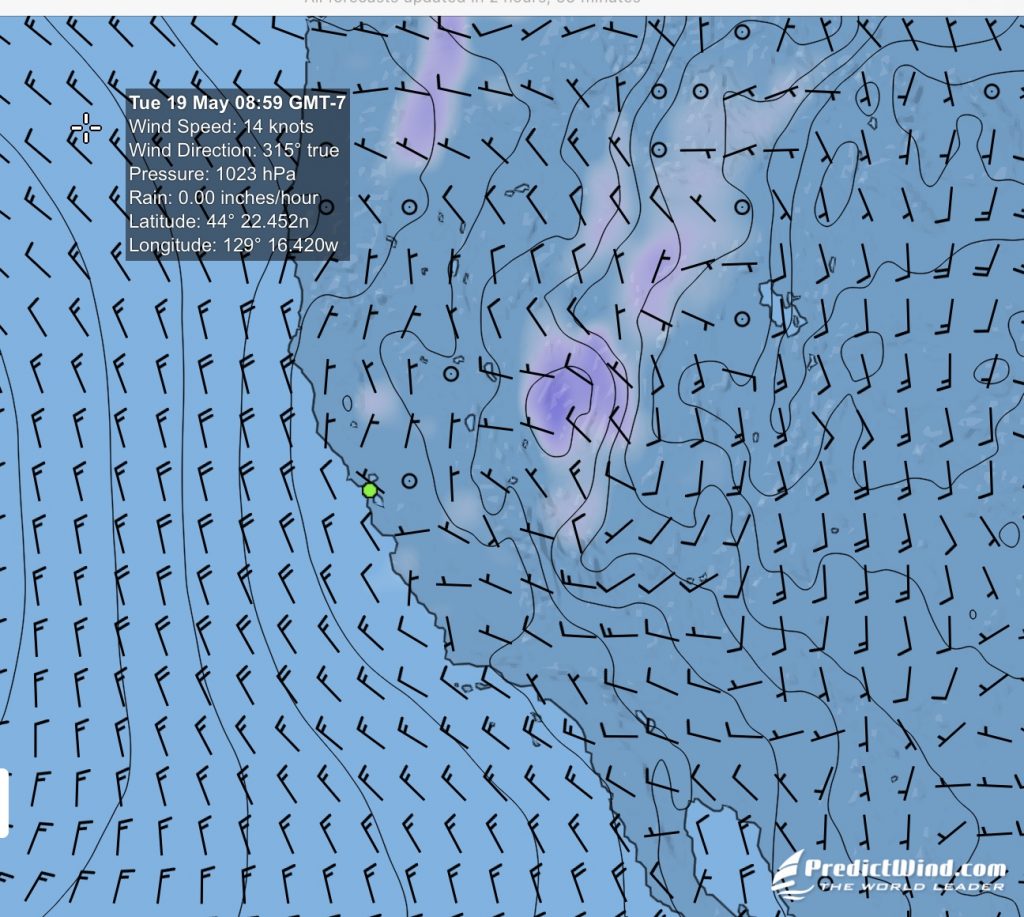 San Francisco sailing involves essentially two factors, the gradient wind which is barometric pressure differences and inland heating  in the Sacramento Valley which is what drives our Summer wind which is typically the strongest.

In winter the winds tend to be lighter and come from varying directions. The big winds come with storm fronts and strong gradients that often are a part of winter storms. Gradients are the lines on the image above. When they are close together, there is more wind. It sometimes is referred to by the weather guys as pressure wind.  But most often there is little barometric  pressure difference over large areas , so there is little gradient wind.  The central valley is no warmer than the coastal areas so there is no wind at all from that factor.

In Summer,  as the hot afternoon air in the Sacramento valley heat up it rises, it creates a sort of vacuum and pulls the cooler air from San Francisco Bay underneath. An old phrase to describe this goes ” The wind doesn’t blow , the valley sucks.” Another factor is a the large high pressure system that sits out in the ocean know as the pacific high.  It often moves in close to shore increasing pressure gradients on our coast. When these two thing happen at the same same, we get the afternoon breezes up to 30 knots.  These winds combined with the currents of the bay have brought about the old phrase , ” If you can sail San Francisco Bay , you can sail anywhere.”

San Francisco Bay currents are driven by tides, but because such a tremendous amount of water comprising all of San Francisc0 Bay and the delta must push through the narrow Golden Gate the currents can be very strong–often up to 3 knots So when we plan our sailing tours and charters, we take these currents into account.

Gentle Storm II moves through the water at between 6-8 kts. But into the current, if our target is directly upwind, we have to sail off about 45 degrees we only make about 3 knots towards that target.  So on a day when we have an incoming tide , or flood, at 3 kts and we are trying to get to the bridge, it becomes a very slow process. But on the opposite tide, we fly out, but get back slowly.

Rick Niles has been sailing all his life and has owned numerous boats, both power and sail. He built his first boat at age 10 and never been without one since. Gentle Storm is fifth sailboat and fourth in a continual upgrade in the Catalina line.

Rick has done numerous California coastal trips and to Mexico twice, and sailed in the Mediterranean, the Caribbean, South Pacific and New England. He has raced on many different types of boats on San Francisco Bay since age 14. He holds a U.S. Coast Guard captains license and would love to introduce you to the world of life on the water.